Being vegan is a philosophy of life that anyone can decide if and when to adopt, supported by one, some or all of these reasons: better preserve ones own health sometimes healing from a particular disease, respect the lives of animals, protect the environment and our planet.

According to the official statement of the Vegan Society in 1951, the Vegan philosophy is “the doctrine stating that men should live without exploiting animals”

Over time the concept has expanded to include respect for the environment and human health through an ethical attitude in everyday relationships.

Discovering a plant based diet, which of course means excluding meat, fish and dairy products, will unveil a world of eternal and tasty colors, smells and flavors that give lightness, energy and well-being.

With our services of Health & Food Coach we intend to support all those who decide to change their diet to ensure a healthy and balanced choice, which always produces greater well-being, joy in preparing savory meals and a desire to share, without imposing, the vegan philosophy. 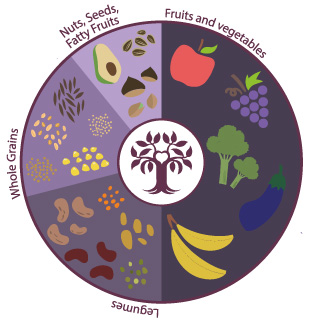 Veganism is an approach that has very old roots. In ancient Greece Pythagoras suggested a vegetarian diet and said “Those who kill animals for food will be more prone than vegetarians to torture and kill their fellow men.”, while Hippocrates who is considered the father of medicine, followed a vegan diet.

Not existing refining processes at those times their diet was naturally a whole food plant based diet, and so of course, healthier
A. Einstein said “Besides agreeing with the aims of vegetarianism for aesthetic and moral reasons, it is my view that a vegetarian manner of living by its purely physical effect on the human temperament would most beneficially influence the lot of mankind”. Moreover: “Nothing will benefit health or increase chances of survival on earth as the evolution to a vegetarian diet.”

The official history of Vegan philosophy begins with English Donald Watson, vegetarian since he was 14 years of age, who in 1944 with some of his friends founded the Vegan Society with the purpose of bringing together those people who didn’t make use of animal products. The same Watson created the term vegan by using the first and last letters of the word “vegetarian”: veg-an. Then, in 1960 the American Vegan Society was founded in the United States.

Over time the number of people who choose to adhere to this philosophy has grown and continues to do so worldwide.

In the whole-vegan diet you eat only whole organic plant based products: no animal products and its derivatives are contemplated. It is also important to avoid refined products and ingredients because in the refining process most of the nutrients are removed depleting the food. Processed foods are to be eaten as little as possible always favoring foods that are intact. This is why we speak of whole food plant based nutrition.

Processed foods usually have these characteristics: are loaded with added sugars that give a lot of energy but no nutrients and can lead to risks of diabetes, heart attack, cancer, obesity; contain all sorts of chemical ingredients for the conservation and enhancement of the flavor and color; are depleted from the original nutrients present in foods in nature, in fact synthetic vitamins, minerals, and antioxidants are added to compensate for what was lost in the refining process; are low in soluble and fermented fiber that otherwise helps treat constipation and slows down the absorption of carbohydrates;  often contain vegetable oils with a very high amount of omega 6 fatty acids that can lead to oxidation and inflammation in the body (moreover, if the fats are hydrogenated “trans” it becomes very harmful to the body).

One would expect all chemicals found in food to have been tested and proven safe for health, but the fact is that allergies and intolerances have increased exponentially in the Western world and these facts are directly related.

A whole vegan diet, especially when it comes to raw food, also aids the body’s natural moisture helping to maintain a good balance in our body without destroying a large part of enzymes and vitamins when cooked.

A whole food plant based diet obviously foresees the consumption of food from certified organic production, to respect the environment in which we live, but not only for this.

The purity of the food is indeed very important for a healthy diet because the body is otherwise intoxicated either directly from preservatives, colorings and flavor modifiers or indirectly from chemical fertilizers and pesticides

EPA, the agency for environmental protection, considers about 60% of herbicides, 90% of fungicides and 30% of the insecticides as potentially carcinogenic. Cancer has increased over time … and it goes without saying that “some” correlation exists!

Being organic food not exposed to the use of pesticides or to an artificial ripening process, it is therefore healthier in addition to having a much better taste particularly when eaten with the skin where the highest content of nutrients are concentrated.

And finally organic products support the environment also from a biodiversity focus which is essential for the life of the planet and the wildlife habitat that otherwise is severely damaged by the use of chemicals and pesticides.

Covid-19 has caused courses to a temporary stop at Spazio Jenny Sugar. We are all quarantined in our homes and it can turn into an opportunity to follow a coaching path with Jenny and take some online classes. For contact: jenny@jennysugar.com or +39 3485240608
Find out!
Copyright Jenny Sugar - All Rights Reserved